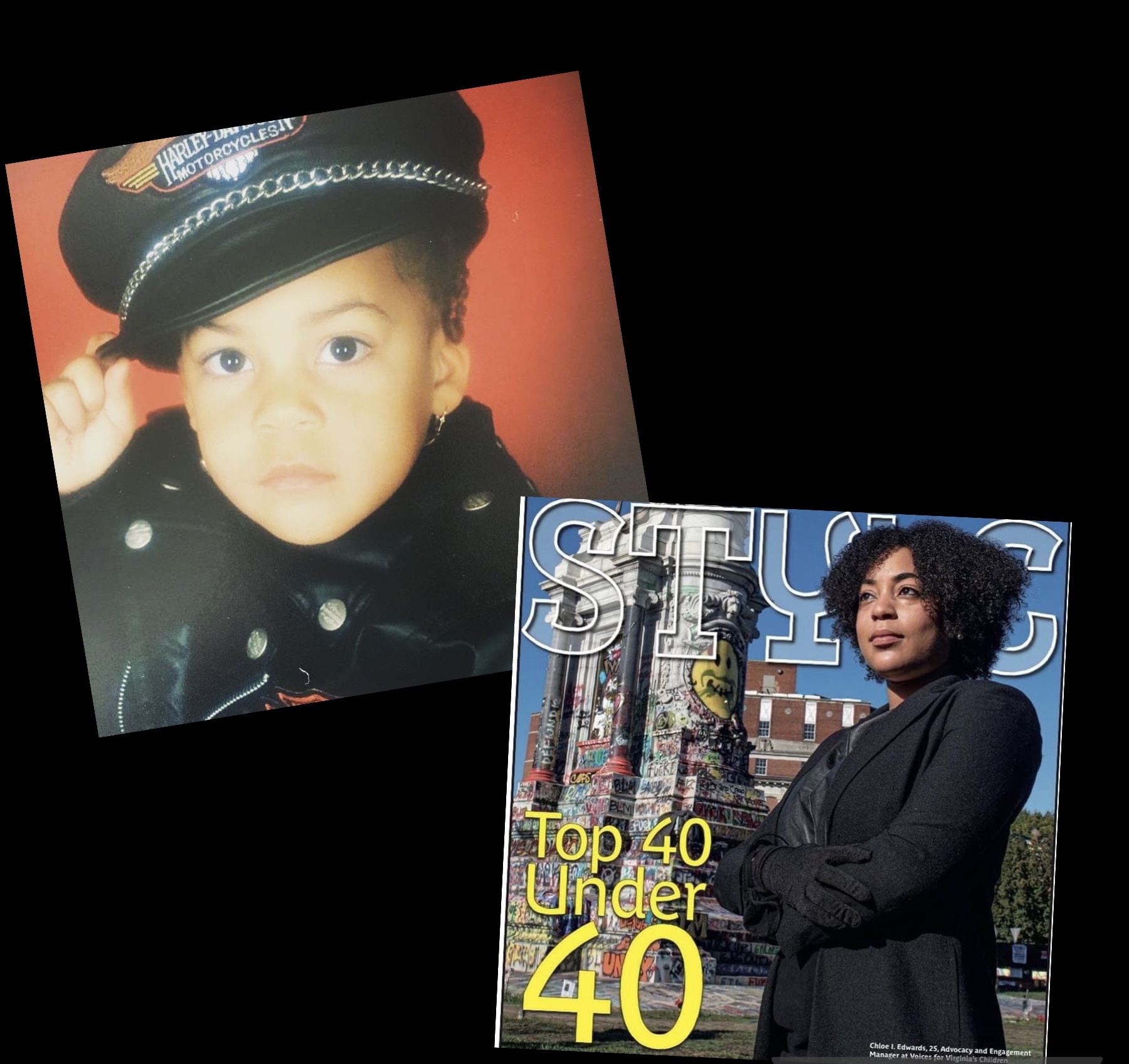 I remember distinctly the first time I crossed paths with Allison Gilbreath at Voices for Virginia’s Children. At the ripe age of 22, I was managing a non-profit organization with a mission to solve Virginia’s child welfare crisis and already breaking concrete ceilings as a young adult, Black woman, PTSD survivor, and kinship foster care alumna. I had never seen Black women represented in powerful spaces. We passionately exchanged innovative ideas like increasing financial supports for kin raising kin, adult adoption, and the overrepresentation of Black children in foster care while simultaneously sharing what lit the fire beneath our passion — our own personal stories.

Allison remembered mine and invited me to speak up at the Virginia General Assembly for Kinship Care Advocacy Day. I found the determination to take full advantage of my seat at the table even though few others looked like me. I knew I didn’t need to “find my voice.” I was already born with one. Growing up as a triplet meant someone was going to be the natural leader, and while I was the youngest of the crew, I proudly took on that role. My Uncle Erick tells me the story of when a woman “moved by the spirit” crossed paths with us. Of all three, she pointed to me and said, “that one…the Lord is going to use all of them, but he is really going to use that one.”

As a child, I was known as Mouth Almighty, Tongue Everlasting. My family “just knew” I was going to grow up to be a lawyer, but a few months after Kinship Care Advocacy Day, I accepted a job as Outreach Coordinator at Voices to work on the Campaign for a Trauma-Informed Virginia to promote trauma-informed policy at the state-level to further prevent childhood adversity. From child welfare advocate to trauma-informed care advocate, I felt as if life had walked me through my lived experiences to find my calling.

I found a home in many of Virginia’s Trauma-Informed Community Networks (TICNs), such as the Southside TICN. However, in plunging into the world of trauma-informed care, as a survivor, when statistics pointed to the possibility of an early death and the gravity of risk factors, I felt an entrenched fear of the unknown. Participants were exchanging Adverse Childhood Experience (ACEs) scores like class grades. With mine being the higher number of eight, I loved the idea of normalization, though I could not help but think, “now what?” Within the span of a couple of years, conversations in these circles shifted from “what’s wrong with you” to “what’s happened to you?” alongside resilience and equity. Yet culturally, I still felt a disconnect and wanted more for Virginians.

Much knowledge of ACEs relies on data predominantly collected from white, upper-middle-class participants and focuses on experiences within the home. During the initial convenings of the Philadelphia ACE Project, members wondered if living in an urban area might bring stressors that were not uncovered in the original study. We can all relate to ACEs and the general questionnaire, but the Philadelphia ACE Project examined community-level adversity, such as living in foster care, feeling discrimination, witnessing violence, or adverse neighborhood experiences. It was not until 2020, amid a modern civil rights movement birthed by The Movement for Black Lives and the pandemic, that my journey began to take a wide turn. 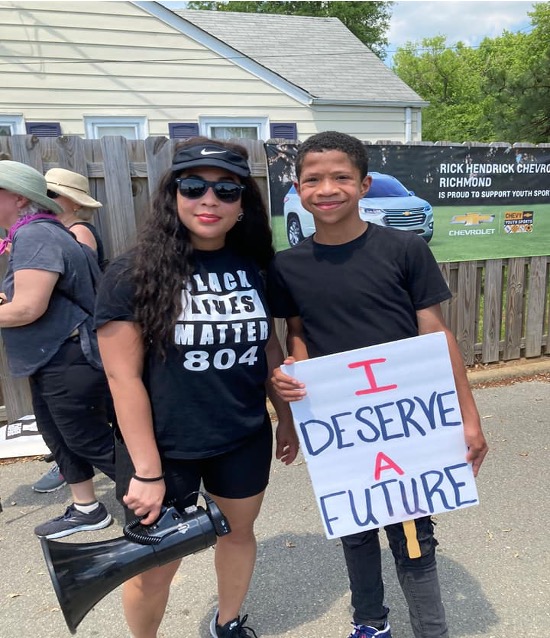 In 2020, my days started at 7AM and sometimes ended late into 11PM at night. I was on the phone for hours with different community members after the death of more Black bodies: George Floyd, Breonna Taylor, Ma’Khia Bryant, and Xzavier Hill, who was shot and killed by state police in Goochland, Virginia almost a year ago on February 26, 2021. Where was the creation of space for people of color as we faced racial battle fatigue and racial trauma? I never had time to grieve.

That year, I became the President of Black Lives Matter 804 founded after the death of 17-year-old Trayvon Martin to combat and counter acts of violence, create space for Black imagination and innovation, and center Black joy to immediately improve Black lives. Additionally, I accepted a position with The Truth Telling Project (TTP) founded after the shooting of 18-year-old Michael Brown, Jr and the anger it generated in communities. TTP engages in stories that galvanize thoughtful, empathetic, and educated allies for Black and communities of color. By encouraging “witnesses” to listen to and reflect on voices “from the margins,” their hope is to lead more people to movements.

TTP was one of the first times I had ever encountered predominately Black and Brown people in “professional spaces” and the first time I saw an organization authentically connect the grassroots (community, community-level & local-level) to the grasstops (state-level, professional organizations, and policy). They introduced me to pieces of my culture that went unlearned in 24 years. They didn’t just focus on the trauma; I felt whole and healed in the process of truth telling and the honoring of culture and ancestors during tumultuous times.

I never imagined myself becoming a leader in the equity and justice space. You don’t just “become” an activist or organizer. Movement work is about the person and their relationships – not rapport. Yet, advocacy spaces were so professional, it felt as if people muffled the personal pieces of themselves. Activism and advocacy tend to operate in silos because an organization’s reputation will not earn their admittance into the world of activism. Outside of the bubble of trauma-informed care, I had to continue to earn “my street cred” and prove I could be successful while working to dismantle systemic odds and my own imposter syndrome.

I jumpstarted counseling with a Black practitioner after feeling the load, but the sense of solidarity I had created with others stirred up the Good Trouble within me. Some of us choose to lead; for me, I stumbled into leadership. After a frank conversation with community leaders, we thought to ourselves, we are tired, and it is unfair to say, “Keep being resilient,” in the face of systemically perpetuated trauma and injustice. Over the years, the word equity became more prevalent, but we wanted action. Each of us were still warriors striving to prevent trauma, but what might that mission look like when informed by equity and justice, truth telling, reconciliation, healing, and repairing the harm done? In that moment, creating a space for us may have just started a movement. No, the question is not what’s wrong with us; yes, we recognize what has happened to us, but also, what’s right with us?

In August 2020, Virginia’s first Racial Truth & Reconciliation Week (RTRW) was born with a mission to empower marginalized communities in acknowledgement of truth to promote healing, reconciliation, and justice for young people, families, and communities. It is now known as the Racial Truth & Reconciliation Virginia (RTRVA) Campaign. In one month, we planned more than thirty events, engaged 50+ community leaders, harnessed the support of the state’s 26+ community networks, and 800+ people. It is likely the only week-long conference and awareness week where everyone has a role to play, ranging from public officials, professionals, community leaders, youth, and kids. Following that, I was promoted to Advocacy & Engagement Manager, and now, I am a proud Policy Analyst.

To date, RTRVA has been supported by public officials across the state, including Governor Ralph Northam. While Voices does not accept public funding, you can find RTRW explicitly named in Governor Northam’s 2022 signature budget as part of the state’s Racial Truth & Reconciliation events. The Campaign is home to the RTR coalition and committees with over 2,500+ members. Not only has RTR influenced community members within the state but also the nation and the world through our events and meetings.

We have a robust trauma-informed, equitable, and just policy agenda rooted in intersectionality. Initiatives include recognizing racism as a public health crisis, making Virginia the first state in the South to do so, and $1M in the Governor’s budget targeted to the state’s trauma-informed community networks. This year, we continue to uplift policies that will empower disadvantaged communities: decreasing food deserts in rural and urban localities, combatting maternal-infant mortality, and tackling language access on behalf of limited English proficient speakers and individuals with disabilities.

While I have now accepted a position as Advocacy & Community Engagement Director at the Coalition on Non-Profit Housing & Economic Development, I am proud of the legacy I leave behind and grateful for the good faith placed in me, a small but mighty little lady! Solidarity only occurs when one person chooses to stand alongside another in the face of injustice. Injustice belongs to all of us. For me, this is my journey of “Becoming Chlo’e Edwards.” I am still learning #HerStory. Who knows where this life will take me?

I will leave you with a millennial dropping of the mic and a piece from my speech at the 41ST YWCA Outstanding Women’s Award.

“What I’d call my destiny is championing social change, systems change, and justice for all people, even when it’s not sexy — to be the fly, the mosquito, the bed bug, the rat, resilient, relentless, and hard to get rid of…. To the little girls who face the intersectionality of their melanin, the patriarchy, age, and womanhood, Michelle Obama calls it ‘Becoming.’”

Keep up with my journey at www.ChloeIEdwards.com.