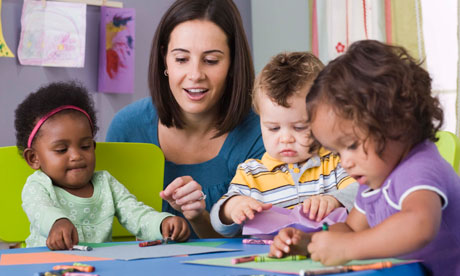 Last year we called for some big ideas for early childhood education in Virginia. During the 2019 General Assembly session we are seeing those ideas take shape in the form of budget proposals and bills. Voices will be working to see these ideas become a reality. In addition, we will support continued investments in early learning, read more details on our budget blog.

For many years now, early childhood stakeholders and advocates have called for better alignment among early childhood program oversight at the state-level, and at the ground-level between public and private early childhood settings. The Early Childhood Success Act (SB1095 and HB2458) sought to make that unification a reality by moving early childhood program oversight, currently housed at the Department of Social Services to the Department of Education. The original bill sought to move the Child Care and Development Block Grant funds and oversight to VDOE along with child care licensing and standards. The bill had a delayed effective date of July 1, 2021 — meaning that the Department of Education, and Board of Education, would have time to develop more detailed plans to move the programs. The bill also sought to establish the Early Childhood Innovation Fund housed at the Virginia Early Childhood Foundation as a means of pooling public and private funds to support local innovation.

As the legislature considered these changes, the Senate made recommendations to slow down and study the advantages and disadvantages of unifying the system. The Senate changes to the bill outline specific stakeholders to be engaged in reviewing the proposals and a timeline to consult with the School Readiness Committee and make recommendations to the General Assembly. Look for more details at the end of this blog for updates on the House and Senate bills.

The call for better alignment in the system has been a long time coming. Virginia leaders have often looked to other states with “offices of early learning” or states that have moved all early childhood effort to the Departments of Education, such as Maryland, as models for what Virginia might do to strengthen our system. We have called out the decline in participation in child care subsidy in Virginia and the need to better align the use of subsidy funds with incentives to improve the quality of child care.

Voices supports the concepts included in Early Childhood Success Act.We are hopeful that these ideas will improve early childhood outcomes across the state, particularly for disadvantaged children. As we work to support the passage of this act, with its potential to make major shifts to early childhood programs, we must think through some of the metrics we would use to define progress and success.

To measure progress toward a smooth and successful implementation we would want to ensure that we increase the number of economically disadvantaged young children who can access high-quality early learning through child care subsidies, Head Start, and VPI. To demonstrate the efficiencies of unification we would want a long-term plan that saves money on oversight and administration. Also, we would want to see a process where early childhood stakeholders can understand how changes may impact their hiring, training, management, and administration.

To measure success, we would want to see more students ready for kindergarten as a result of these efforts. Recently we have pointed out that using our current measure of readiness, the PALS-K, our statewide outcomes have stalled, showing not much improvement in readiness each year. We are hopeful that we can keep using this benchmark to demonstrate when investments in early childhood systems and quality improvement began to demonstrate a big pay off and return.

There are two identical bills in the Senate SB1313 (Dunnavant) and SB1095 (Howell). They are now rolled into one bill, SB1095 which was reported by the Committee on Education and Health and referred to Finance. The Finance committee reported the bill as a substitute that the Superintendent of Public Instruction and the Commissioner of Social Services form a workgroup to study how alignment between DSS and VDOE may occur and make recommendations for the best methods of governance. Finally, Senator Hanger offered a floor substitute that laid out the stakeholders to be represented in a workgroup and expanded the study to include reviewing creating the Early Childhood Innovation Fund as well. The Senate passed the floor substitute on 2/4/19 with vote of 37- Yes, 2-No, and 1-Abstain. Read more details of the floor substitute here. This version of the bill would now go to the House for consideration.