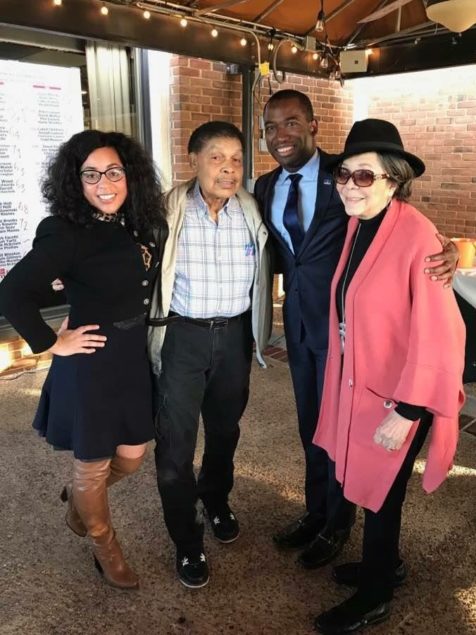 She is dedicating her life to helping children and youth. As the program director and a grant project director at Connecting Hearts in Virginia, Chloe focuses on the nonprofit’s mission of finding every child a permanent, loving home. On Wednesday, she was sworn in as a Court Appointed Special Advocate (CASA), a trained volunteer who advocates on behalf of abused and neglected children in the court system.

“I would not have gotten involved in child advocacy had it not been for my childhood,” Chloe said. Her father was in and out of jail and on and off drugs. Her mother, who experienced mental illness, was emotionally abusive to Chloe, her sister, and her brother, who are triplets. She was also physically abusive to Chloe.

“My sister and I went to live with my grandparents when we were 14,” Chloe said. “Our placement became permanent when we were 17. My brother stayed with my mom.”

She shared her kinship care experience with legislators on Jan. 22 when she joined other advocates at the General Assembly during Kinship Care Advocacy Day, an event organized by Voices for Virginia’s Children and Virginia Poverty Law Center.

Chloe voiced her support of a bill that would create the Kinship Guardianship Assistance Program (KinGAP) to facilitate child placements with relatives and ensure permanency for children for whom adoption or being returned home are not appropriate permanency options.

“We talk a lot about foster care and adoption, but we don’t talk enough about kinship care,” Chloe said. “I think it is a better option than foster care. Kinship care allows you to be connected to your family and culture and to avoid the threat of multiple placements in foster care.

“The work Voices is doing to support kinship care will make it a smoother transition for many youth.”

“The work Voices is doing to support kinship care will make it a smoother transition for many youth.”

Chloe told lawmakers KinGAP would have benefitted her and her siblings had it existed. Her grandparents, who were in their seventies when Chloe and her sister went to live with them, might have been able to afford to take in her brother too, had he chosen to live with them, if they had been eligible to receive the financial resources foster care parents receive.

KinGAP would have provided them with information and support to help Chloe and her sister deal with the trauma they had experienced. “I don’t think my grandparents were familiar with trauma,” Chloe said. “No one was there to guide them through the process of transitioning us.”

Despite their unfamiliarity with trauma-informed care, Chloe credited her grandparents with providing a stable, nurturing home that fostered resilience in her and her sister. Voices advocates for trauma-informed policies that would help children like Chloe.

Chloe thanked Voices policy analyst Allison Gilbreath for inviting her and others with firsthand experience to Kinship Care Advocacy Day and providing them with tips on talking to lawmakers.

“The most helpful thing was that people who will be affected by this bill were there to speak about it. That’s what made the difference in passing the bill this year.”

“I felt really excited to be a face in the kinship care story,” Chloe said. “I was comfortable sharing my story with lawmakers. The most helpful thing was that people who will be affected by this bill were there to speak about it. That’s what made the difference in passing the bill this year.”

Read also our blog about the passage of the KinGAP bill and this Richmond Family Magazine column about kinship care.