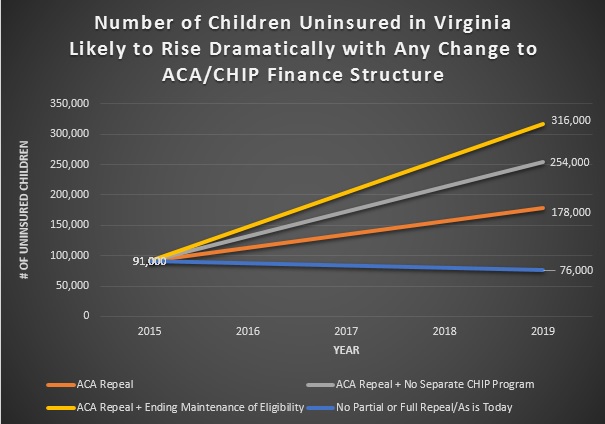 A summary of this post is available in our publication “Federal Choices Threaten Health Insurance for Virginia’s Children.”

President Trump and leaders in Congress have made it a priority to repeal the Affordable Care Act (ACA). In addition, federal funding for the Children’s Health Insurance Program (CHIP, known as FAMIS in Virginia) will not continue past September if Congress does not take action to fund it by then. Changes in the ACA and CHIP would have a tremendously harmful impact on children’s access to health care.

Why does this matter? One of the single greatest successes in child well-being over the last 50 years (due to Medicaid), and particularly in the last 20 years (due to CHIP), is the fact that millions of children have gained health insurance. Nationally, 95% of children now have health insurance, according to a recent report from the Georgetown Center for Children and Families. Research has shown that having health insurance increases access to health care—both well-child and sick care—leading to better education outcomes, as well as higher earnings and better health in adulthood. Policymakers are discussing changes that could cause two or three times as many children in Virginia to become uninsured in the next two years. These policy decisions will have extremely negative and long-lasting effects on the well-being of Virginia’s citizens.

The Current Situation in Virginia: Right now, roughly 95% of children (<18) are enrolled in some type of health insurance. These gains are largely due to Medicaid and CHIP/FAMIS, which are federal-state partnerships that provide coverage for children in low-income families. Nearly 600,000 Virginia children have health insurance through Medicaid and FAMIS, and an estimated 50,000 Virginia children are enrolled in insurance plans through the ACA Marketplace.

The Urban Institute study estimates that if no policy changes were made to these programs, the rate of insured children would actually increase to more than 96% in Virginia in 2019. That would leave approximately 76,000 children uninsured.

The Urban Institute has conducted an analysis of the effect of several possible policy changes on access to insurance for children (<18). Its analysis is based on the policy changes that were part of a reconciliation bill passed by Congress in and vetoed by President Obama in January 2016; in other words, these are policy changes that Republicans have already moved through Congress once and would likely be the basis for future action.

Scenario 1: ACA Repeal. The most immediate threat to access to care for children and their families is the repeal (most likely partial repeal) of the ACA because Congress has already taken the first step to do this. Currently under debate is whether Congress will create a replacement at the same time it repeals the ACA, or whether replacement will come later. As of today, there is no replacement plan on the table for consideration. Repeal – even partial repeal – without replacement would mean a great deal of uncertainty in the private insurance market, and would reduce access to affordable plans.

The Urban Institute estimates that an additional 100,000 children would become uninsured through a partial repeal, meaning the child uninsured rate would jump from 3.7% to 8.7% in Virginia in 2019. An estimated 178,000 children in Virginia would be uninsured.

The Urban Institute estimates that the combination of ACA partial repeal and the end of federal CHIP funding would cause the child uninsured rate to reach 12.3% in Virginia in 2019. This would mean roughly 254,000 Virginia children would be without health insurance. (Note: this estimate is based on states keeping their CHIP-funded Medicaid programs, which in Virginia cover children ages 6 to 18 with family incomes between 109% and 143% FPL. Keeping those children enrolled would also take additional state funds.)

Scenario 3: ACA Repeal + Ending Maintenance of Eligibility. The ACA included a provision that required states to maintain the levels of income eligibility for children in Medicaid and CHIP that existed when the ACA was enacted until 2019. This provision means states cannot cut children from insurance by lowering the eligibility levels. In Virginia, children are covered under Medicaid or FAMIS if their combined family income falls below 200% FPL. The 2016 bill Congress passed and President Obama vetoed would have allowed the “maintenance of eligibility” provision to expire in 2017, leaving states with the ability to lower eligibility levels to 138% FPL for children under age 6 and 100% FPL for children ages 6 to 18. It is not guaranteed that states would reduce eligibility; however, states already face significant budget pressures to fund growing expenses in the Medicaid and CHIP program, and cutting CHIP eligibility levels would provide cost savings. Thus, it is not unreasonable to consider this as a likely alternative.

The Urban Institute estimates that the combination of ACA partial repeal and the end of the maintenance of eligibility requirement would cause the child uninsured rate to reach a whopping 15.4% in Virginia in 2019. This would mean roughly 316,000 Virginia children would be without health insurance, triple the current number of uninsured children.

These three scenarios are the ones considered by the Urban Institute report from December 2016. Additionally, Congress is considering converting Medicaid from an entitlement to a block grant to the states or a per capita cap that would also reduce federal funding for Medicaid. For more on how this would impact children, stay tuned for Part 2.

You can find the rate of uninsured children in your locality on our KIDS COUNT Data Center under health indicators.

Note on data sources: There are multiple sources of data for the rate of uninsured children. National reports, such as the Georgetown and Urban reports referenced, use the rate for children under age 18. However, Medicaid and CHIP cover 18-year-olds, so Voices uses the Census’ Small Area Estimates as its data source on the KIDS COUNT Data Center to account for all eligible ages (birth through 18 years of age). This accounts for the slightly differing estimates in the number of uninsured children.

PART 2 : Threats of Block Granting Medicaid or Per Capita Caps