“Fostering Futures” Has A Bright Future Of Its Own 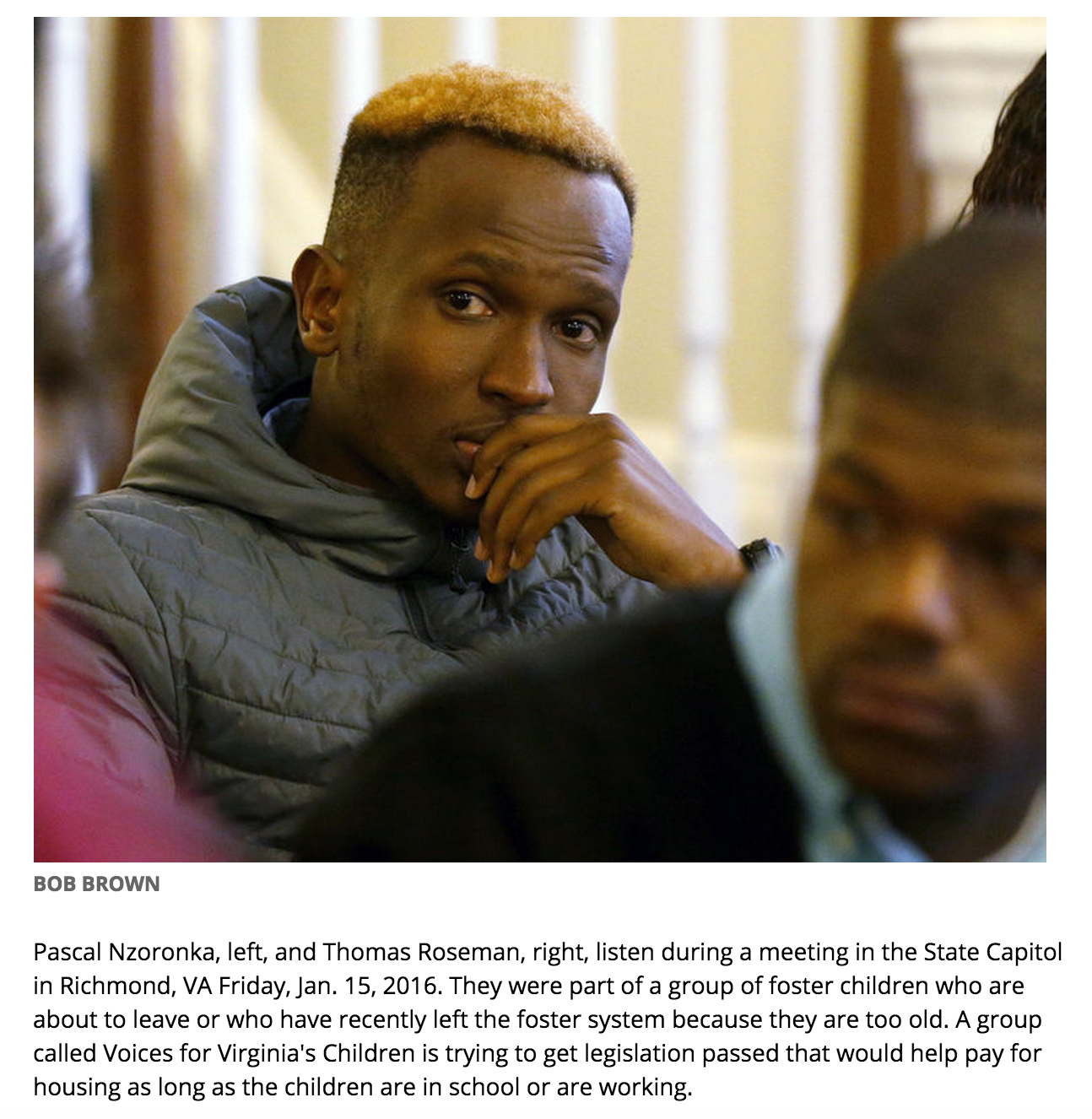 Great news to report on our effort to extend transition-to-independence support to youth aging out of foster care in the Commonwealth: “Fostering Futures” was included by the General Assembly in the final budget package it has sent to Gov. McAuliffe for signature! And since the program was originally included by the Governor in his introduced budget & fully supported by the administration, we expect it to remain intact even as Gov. McAuliffe considers his further line-item amendments.

Many of you have been following “Fostering Futures” as it made its way through the legislative process–the path was not always smooth or certain. We began with the funding included in the introduced budget and versions of an accompanying bill filed in both the Senate and the House (SB 436 & HB 203).

By midway through the session, we had lost both bills, and only the Senate had committed to preserving the funding in its initial budget proposal. We were down at that point, but certainly not out. (It’s tempting to think when bills are tabled that a measure is dead, but if funding is necessary to its enactment, language can always be added to the budget bill to accomplish what the bills themselves would’ve changed–the budget bill is law & trumps all, though it only has force for the two years of its own enactment.) As such, we turned all of our advocacy to the budget conference process: when a few key decision-makers from each chamber negotiate the differences in the Senate and House budget proposals to come up with one combined budget.

In the waning days of session, we were thrilled to learn that the Senate and House had agreed to include the program in its compromise budget bill. Since the substantive bills had already been tabled, the conferees added language to the budget making the necessarily legal changes for the program to be accepted under federal law and implementation to begin on July 1, 2016 (once the budget has been signed by the Governor). Next year, we may likely need to bring a substantive bill through the 2017 session to codify the program to ensure it is ongoing law.

The version of “Fostering Futures” that passed this year represents years of ongoing work to craft a program that 1) maximizes the support to youth aging out of foster care, while 2) representing a measured step forward that lawmakers from both sides of the aisle (especially on the money committees) would agree merited the new funding. As such, there were some compromises that were less-than-preferable, but overall, a lot of wins for youth (and efforts that Voices has been working on for some time):

One concession made this year: the implementation of Fostering Futures will be staggered on an annual basis by age. That is, youth who will turn age 18 on July 1, 2016 or later will be eligible for Fostering Futures. Unfortunately, those youth who have already aged out of care and are under age 21 will not be “grandfathered” in to the program; however, the current 18-21 Independent Living program will continue to exist for these youth.

Fostering Futures would not be headed towards implementation this year without a tremendous, diverse collaborative effort behind it. There isn’t room in this post to thank everyone who contributed, but I would like to call out a few integral partners…

First and foremost: all the young people who are currently in or who aged out of foster care who lent their voices, ideas, expertise, and passion to this effort. Whether speaking with Sen. Carrico for two hours down in Abingdon, Va. in December, visiting the Capitol and speaking with lawmakers during session, testifying at committee hearings, talking with me directly about their personal experiences and ideas, or filling out surveys, we couldn’t not have accomplished our goal without them.

Our Patrons: Fostering Futures has always been fortunate to draw on the strength of its bipartisan support: Sen. Barbara Favola and Del. Chris Peace have been champions of youth in foster care generally and Fostering Futures specifically for years. This session, they were joined by Del. Scott Lingamfelter and Del. David Toscano, and given strong support in the media by Del. Jennifer McClellan, as well as impassioned advocacy from Del. Dickie Bell during a House floor speech. Gratitude also goes to the Health & Human Resources budget conferees & chairs: Sens. Janet Howell, Emmett Hanger and Tommy Norment, along with Dels. Chris Jones, Steve Landes and John O’Bannon.

Our Partners: There are way too many to name, but a special nod to: the Virginia Poverty Law Center, FACES of Virginia Families, the Family Foundation of Virginia, and the League of Social Services Executives for being such perennial, consistent, dedicated advisors, advocates, and “boots on the ground” in support of Fostering Futures. Thanks also to Great Expectations and UMFS/Project Life for their (sometimes daily) support.

This is not to diminish the incredible outpouring of advocacy from all of our many partners, from all corners of the Commonwealth, whether organizations, churches, individuals, or the administration itself; everyone’s contributions were so critical to our success. You made calls, sent emails, talked to legislators, offered advice, shared media coverage, and kept us positive: thank you all!

Stay Tuned: Voices will continue to monitor Fostering Futures during its implementation, and like all good advocates should, we’ll work to make sure youth voice and our own expertise play a role in this developing effort.