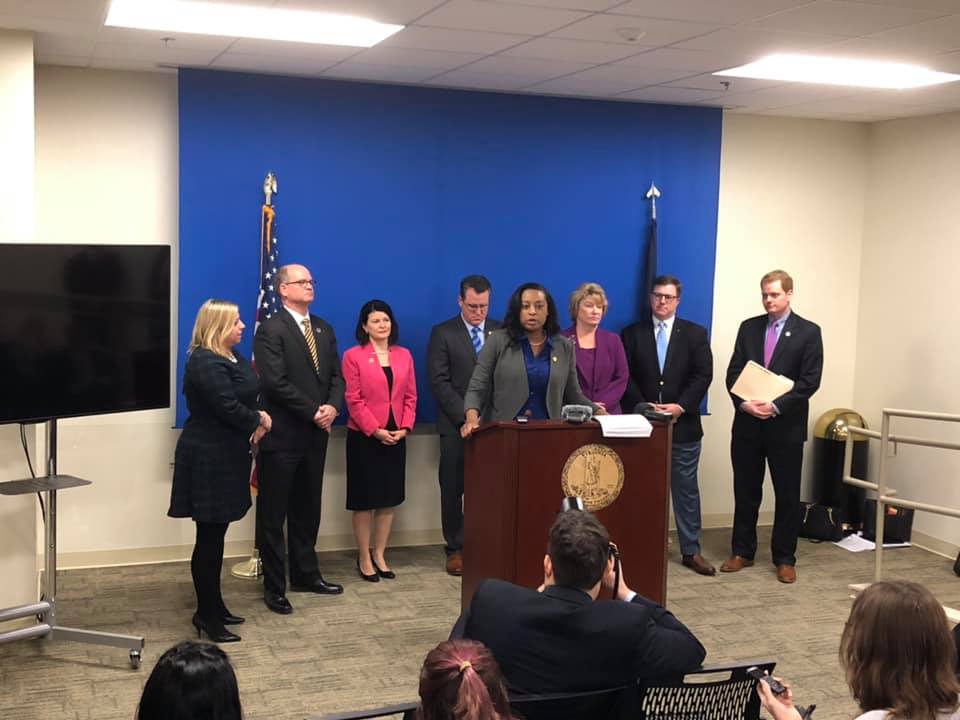 Legislators from both sides of the aisle gathered Tuesday, Jan. 15, 2019 to show their support for much-needed changes to Virginia’s foster care system. The newly created Foster Care Caucus was hosted by co-chairs Del. Emily Brewer, R-Suffolk and Sen. Monty Mason, D-Williamsburg. The caucus hopes to raise awareness of the deficiencies within the foster care system, support the initial steps to implement the federal Family First Prevention Services Act, and bring structure and supports to the kinship diversion program. Additionally, it hopes to increase accountability of Child Protective Services and foster care by strengthening the authority of the Virginia Department of Social Services over local departments.

Sen. Mason is sponsoring bills to allow the commonwealth to meet new foster care standards set by the Family First Prevention Services Act. Regarding the caucus, Mason said, “We need to take this moment and make it a priority.”

Del. Brewer is introducing bills to make it easier to place children who need to be removed from a home with relatives, and to protect children in foster care from identity theft by freezing their credit. Brewer told those in attendance, “We have started something that we are going to carry forward.”

Caucus members heard presentations from DSS Director of Family Services Carl Ayers and our policy analyst Allison Gilbreath. In Virginia, 6 percent of children in foster care are placed with a relative, compared with 32 percent nationwide. Allison told the group that when a child is placed with a relative (kinship care) instead of foster care, evidence shows the likelihood the child will find a permanent home and a more stable life increases significantly.

She also detailed Voices’ kinship care tour across Virginia, where she heard from foster care families about what kind of issues they encounter. “We learned that the majority of children who are going to live with a relative are doing so because of parental substance abuse,” said Allison. “I know that we see the statistics, but it was one thing to see almost every single family that raised their hand said that their child was using opioids.”

Also in attendance at the Foster Care Caucus to show their support:

Last month, the Joint Legislative Audit and Review Commission(JLARC) reported that Virginia is below average when it comes to finding permanent homes for children in foster care.  In addition, the report showed that the system keeps too many children in institutions, and lags behind other states in placing foster care children with relatives.

Members of the caucus are introducing several bills related to foster care, including the creation of a children’s ombudsman to oversee child-serving agencies, a bill that would protect the credit and identity of teens in the foster care system by freezing their credit until age 18, and legislation that would promote discussion about communication between children and their families while in foster care.