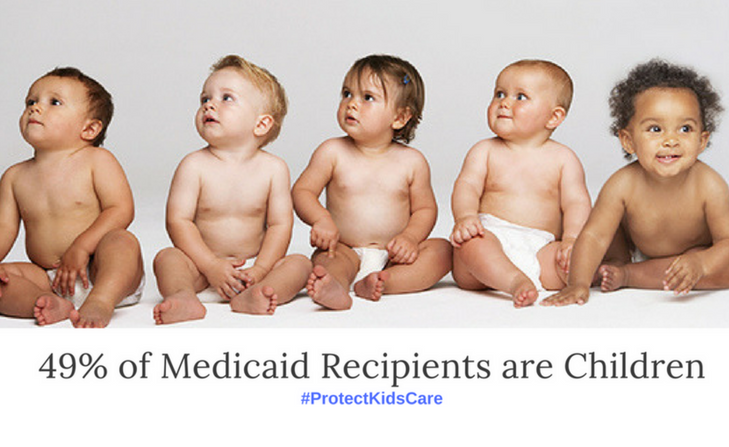 This week in Congress, Republicans unveiled their plans to repeal and replace the Affordable Care Act (ACA). Their effort, called the American Health Care Act (AHCA), was introduced and quickly voted through two committees in the House of Representatives. Congress has placed this bill on a fast-track process, so the time to make your voice heard is NOW.

The AHCA is primarily designed to repeal the ACA, and it has several components that increase the cost of health insurance for families, making it likely many will lose insurance. It does allow for people with pre-existing conditions to get coverage, and it allows parents to keep their adult children on their health insurance until 26. However, the legislation makes sweeping changes to Medicaid. In Virginia, almost half a million children have Medicaid, so these changes are the part of the legislation that will have the largest impact on kids.

As we feared, the legislation will cut federal spending on Medicaid through a per capita cap (pre-determined amount of funding per enrollee). The size of the cuts will actually grow over time, which will leave Virginia with a large gap in funding for its Medicaid program. If Virginia’s legislators decide not to close the gap with state funds, they will have to make cuts to the Medicaid program.

Cuts to the Medicaid program mean that the populations covered by Medicaid in Virginia will be forced to compete with each other to maintain Medicaid coverage. Who are these populations? Children, including kids in foster care; youth formerly in foster care; pregnant women; very low-income parents and adults with serious mental illness; the elderly; and children and adults with disabilities. Per capita caps place states in the untenable position of choosing which group to harm.

Cuts to the Medicaid program could mean children lose access to health care in the following ways:

Cuts to benefits, such as EPSDT: the comprehensive medical, mental, dental, hearing and vision benefits for low-income children, including kids in foster care, are critical to providing them with a healthy start in life. Early and Periodic Screening, Diagnosis and Treatment (EPSDT) allows doctors to be the experts in determining what treatment is medically necessary, rather than have policymakers pre-determine what kids might need. Furthermore, Medicaid is the backbone of the behavioral health system in Virginia; cutting these services would have a devastating effect on kids and their parents who need this treatment.

Cuts in eligibility: One way to cut costs in the program would be to limit enrollment by income or category (e.g. youth who have aged out of foster care). This would potentially create waiting lists for Medicaid, and low-income families would be unable to afford any other type of insurance.

Cuts in provider reimbursements: Many Medicaid rates are already low and further reductions would likely lead to fewer pediatric providers taking Medicaid patients. This would leave kids without care.

Ripple effect on other services: Increased pressure on the state budget to meet the needs in the Medicaid program would strain Virginia’s ability to fund other core government functions, such as schools and public safety. The Center on Budget and Policy Priorities has estimated that per capita caps shift $370 billion to states over ten years.

Contact your Representative in Congress TODAY to let him or her know you oppose federal cuts to Medicaid.

Learn more about health insurance for Virginia’s children with this fact sheet from Georgetown’s Center for Children and Families.

Learn how the AHCA is bad for kids and families in other ways from Community Catalyst.