In Recognition of Juneteenth 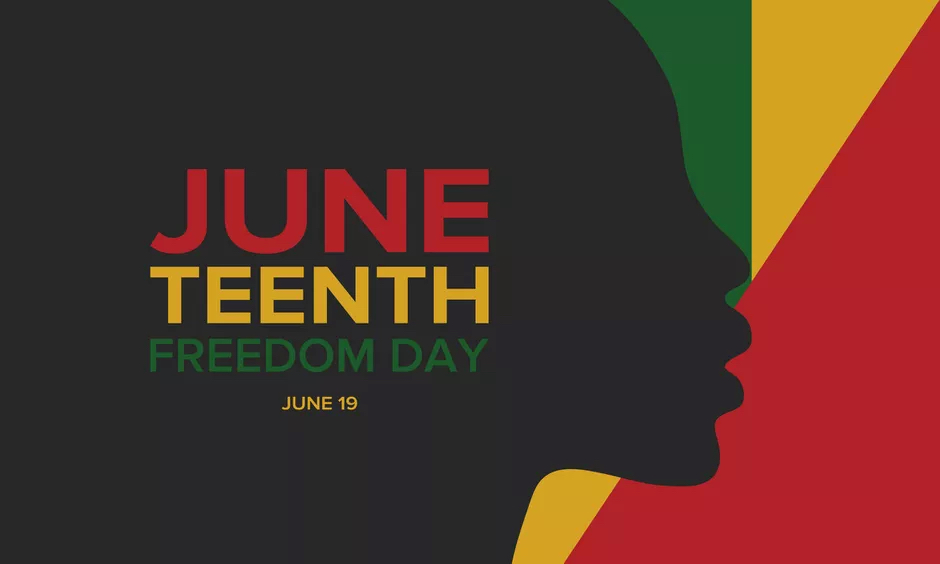 The newly federally-recognized holiday Juneteenth celebrates the last enslaved people being freed in the United States. This day commemorates June 19th, 1865, rather than January 1st, 1863, when the Emancipation Proclamation was signed into law. This is because the last enslaved people to be informed of the abolition of slavery were finally freed on the day of Juneteenth, around two and a half years after all enslaved peoples were declared free under the law. From the Smithsonian National Museum of African American History and Culture, “Juneteenth marks our country’s second independence day. Although it has long celebrated in the African American community, this monumental event remains largely unknown to most Americans. The historical legacy of Juneteenth shows the value of never giving up hope in uncertain times.”

US society continues to be impacted tremendously by the legacy of slavery. Systemic racism is built into the very foundations of the US, from education to neighborhoods to economic opportunities. Black people are subject to structures that allow for the same racist laws of the past to exist today in different forms. For example, slavery is still legal under the loophole in the 13th Amendment that allows for involuntary servitude in the case of punishment for a crime. This technicality has an exaggerated impact on marginalized peoples, reflected in the inflated representation of Black people in the criminal and juvenile justice systems.

Juneteenth is an important reminder that even if equality is written into law, equity is necessary and far more difficult to achieve. Equality gives everyone the same exact resources. Equity acknowledges the disparities affiliated with oppression and inequality, and therefore, distributes resources based on the needs of the recipients.

In Virginia, 47% of children are children of color. Children of color are impacted greatly by systemic racism and racist structures. The data shows that the majority of short-term suspensions in Virginia are suspensions of Black and Hispanic students. We also know from the data that students of color do not commit more offenses in school than their White peers. This indicates differential treatment in the way discipline is assigned to children of color. In addition to short-term suspensions, a study by the Journal of the American Academy of Pediatrics reported that Black children were six times more likely and Latino children were three times more likely to be shot by police than their White peers. These disparities deeply impact well-being and success for Virginia’s children and families of color and highlight the systemic racial inequity in Virginia.

While there is still a great deal of work to be done, Virginia legislators have passed some incredible policies in the past year to aid in the fight for equitable lives for children and their families. Virginia was the first state in the South to declare racism as a public health crisis and as a result of this declaration, the Commission to Examine Racial Inequity in Virginia Law was made permanent and the Virginia Department of Health’s Office of Health Equity was expanded to ensure the implementation of policies addressing racism. Recent equitable policy solutions have also been able to target individuals in Virginia who are missing out on opportunities, such as the ability to afford high quality preschool, and have also aided in removing barriers to obtaining services, such as removing the asset tests or child support enforcement compliance for benefits.

There is much work left to be done to ensure all children and youth lead long, successful lives, regardless of their racial or ethnic identity. Voices for Virginia’s Children strives to emphasize the importance of promoting equity in this process. Just like those who continued to be enslaved after the Emancipation Proclamation was signed, there are people who continue to be harmed by imbalanced social structures. Equitable practices that get to the root of these problems are necessary for Virginia’s children to be allowed to live a life free from racial and ethnic inequities. We encourage everyone to participate in Voices for Virginia’s Children Racial Truth and Reconciliation Week 2021 to help dismantle racism as a public health crisis in solidarity with those that experience racial injustices and we invite everyone to join us in recognizing and lifting up Juneteenth, this Saturday, June 19.

Check out this video, featuring staff member Chlo’e Edwards, from our partners at UMFS Project life.