We believe the current juvenile justice system’s use of large juvenile prisons does not make our communities safer or rehabilitate our youth, and the current system does not use best practices to put youth on a path toward law-abiding lives. The Virginia Department of Juvenile Justice is making strides to transform this system for those reasons. Along with the RISE for Youth Coalition we will monitor how funds might be used to construct more juvenile detention facilities and advocate for those dollars to be reinvested to in community-based alternatives. Check back here for weekly updates. 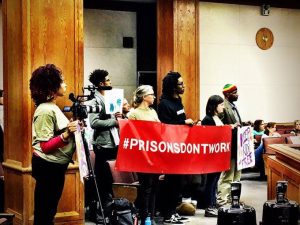 In addition to transforming the juvenile justice system, we believe that we have to stop the funnel of children entering the system by dismantling the school to prison pipeline. Virginia is the worst in nation for referring students to law enforcement. During the 2012 – 2013 academic school year 27,568 students were suspended and of that 16,019 were elementary school students. In addition, students of color and students with disabilities were disproportionally suspended. Students who are suspended from school are more likely to experience academic failure, mental health problems, substance abuse, gang activity, and justice system involvement, according to research.

The Advocacy day for Rise for Youth was Monday, January 18th. Lieutenant Governor Ralph Northam hosted us for a kick-off breakfast. Members of the coalition and youth directly impacted by the juvenile justice system shared their experiences with the general assembly and asked specifically for money saved from closing youth prisons be reinvested into a continuum of alternative services. Youth highlighted positive experiences at organizations like Art 180, that work with teens in the juvenile justice system, in partnership with Legal Aid Justice Center, to connect the dots between creative expression and advocacy. 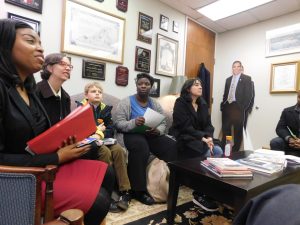 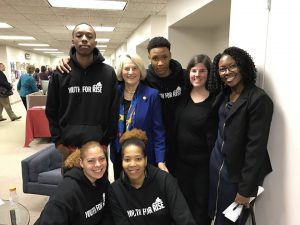 Voices will  support these three bills from our partners at Just Children:

Item 132 #1h – Comprehensive Evaluation of School Discipline Practices – This amendment provides $50,000 the second year from the general fund to the Department of Education to conduct a comprehensive evaluation of restorative practices and other similar approaches used by Virginia school divisions to address school discipline, school-based arrest, and school climate issues.