Virginia trails the nation in mental health access for children.

Voices and our partners are working to bring attention to these issues and to the need for transformation of our children’s behavioral health system in Virginia. We are advocating for increased access and improved coordination of quality mental health services for all children in Virginia, regardless of where they live or what system identifies their needs.

What do we do? 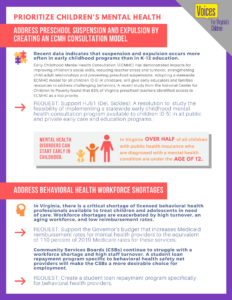 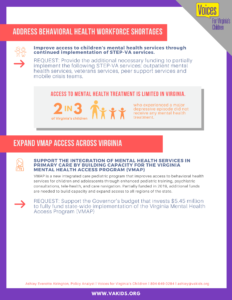 Here we are being recognized on Mental Health Advocacy Day 2019 and other highlights!

Voices and our partners for Mental Health Advocacy Day are recognized at the GA— There were SO MANY advocates we have to share this with you from our view in the “overflow room”! ? Creigh DeedsChildSaversNAMI VirginiaVOCALMental Health America of Virginia#voices4kids

Thank you Sen. Creigh Deeds for your time this morning during Mental Health Advocacy Day and for talking with us about the need for more pediatric mental health psychiatrists. ChildSaversNAMI VirginiaMental Health America of Virginia#voices4kids

How many children have mental health needs?

The Surgeon General and SAMHSA report that as many as one in five kids has a mental health need. And of those, only one in five gets the treatment he or she needs.

In May 2013, the U.S. Centers for Disease Control and Prevention released Mental Health Surveillance Among Children — United States 2005-2011. Among the report’s findings:

Why aren’t children getting the help they need?

Virginians Speak Out, May 2010: A summary of the findings and recommendations gathered by the Campaign for Children’s Mental Health after a series of regional forums around Virginia with service providers and families.

Voices and its advocacy leaders have been involved in the work of the following task forces, commissions, or committees:

The “Now Is the Time” Project AWARE initiative aims to develop an integrated, cohesive, and comprehensive continuum of services to address mental health needs of children and youth. Over a period of five years, this project will:

All meetings are open to the public and held at the General Assembly Building. Meeting materials are posted as they become available.

Every dollar counts in the fight for Virginia's children 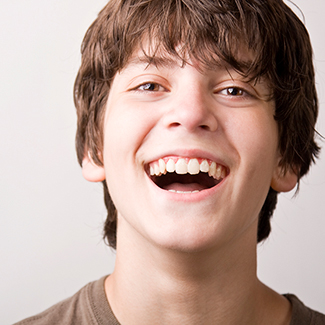 Make Children a Priority with a Permanent Children’s Cabinet