On Wednesday, October 5 at the Bolling Haxall House, 200 guests were entertained, inspired and captivated by the recipients of this year’s Carol S. Fox Making Kids Count Awards Reception. The event, in its 5th year, acknowledges and celebrates an individual and organization that had an impact for all kids over the commonwealth. New this year was the Theodore R. Groves Memorial Award. Named in honor of our Kids Count Director, the late Ted Groves, the award recognizes a Virginia individual or organization for exemplary efforts in improving the lives of children in the commonwealth by promoting racial and ethnic equity for Virginia’s kids. 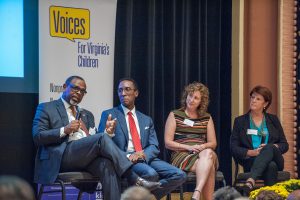 Voices for Virginia’s Children would like to thank our Title Sponsor (Dominion), Reception Sponsor (AT&T), all the other sponsors, distinguished guests, and emcee Lisa Schaffner.  All those in attendance were treated to inspirational videos and engaging conversation, and left feeling enthusiastic after hearing the recipients’ stories.  This year’s Carol S. Fox Making Kids Count Awards Reception was very successful, raising $50,000!

To learn about the recipients, watch these videos!.