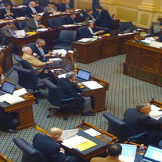 What funding for kids made it into the House and Senate versions of the budget? This document — Committee Approved Budget Amendments — gives you an update of what the Senate Finance and House Appropriations Committees included when they reported out their budgets on February 19. Since then, the House approved its budget, but the Senate did not. We’ll keep you posted as this unusual budget year plays out.

What were we asking for? Here you’ll find the specifics of legislative amendments to the Governor’s budget that affect children’s mental health. Our Campaign for Children’s Mental Health has two big priorities this session: Child Psychiatry Demonstration Projects and Crisis Response Demonstration Projects. Read more about the specific budget amendments for these items that the General Assembly considered.