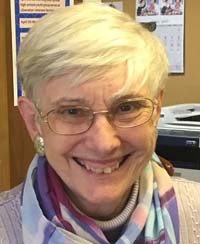 Voices board member Lee Switz traces her involvement with social justice to 1964 when she boarded a bus bound for Washington, D.C. A recent 21-year-old college graduate, Lee went to work on War on Poverty programs affiliated with President Lyndon Johnson’s Great Society.

“It was a very exciting time,” Lee says. “I thought we could change the world. I was hooked.”

Shortly after moving to Washington, Lee moved again, this time to Cleveland to marry. While there, she continued her War on Poverty work, running an adult-literacy program and helping to set up a preschool program for low-income children.

Eventually Lee moved with her young family to Richmond, where she joined St. Paul’s Episcopal Church, which was active in civil rights and social justice work. At age 34, Lee became only the second woman ever elected to the church vestry.

“A lot of older men [on the vestry] mentored me,” Lee says. “I learned from them that you’ve got to understand money.”

Her need to understand money and funding for worthy programs became more acute in the late ’70s, when she says, “Great Society programs and federal spending were leading to economic stagnation. I had a wake-up call: Government support alone for all these causes I believed in was not going to work.”

Lee returned to school and graduated from VCU in 1980 with an MBA. Shortly afterwards, the Episcopal Diocese of Virginia hired her to raise the endowment for its church schools.

“Very sophisticated people at the diocese trained me in fundraising,” Lee says. “I have continued to use what I learned for causes I care about.”

Lee had another major wake-up call while mentoring a middle school child from Richmond’s East End from 1999-2002.

“I realized people of good will like me could try to help an East End middle schooler and that a ton of good organizations are doing direct service. But you can’t get anything done if public policy is working against you. It’s important to have independently funded data-informed organizations—like Voices with its KIDS COUNT data—working on public policy.

“It’s important to have independently funded data-informed organizations—like Voices with its KIDS COUNT data—working on public policy. It’s wonderful to feed a child, but if you change a policy, it affects thousands of children.”

“It’s wonderful to feed a child, but if you change a policy, it affects thousands of children.”

For the past 24 years, Lee has been president of Lee Switz & Associates, a consulting company specializing in nonprofit fundraising. She was a member of the planning committee that established Voices for Virginia’s Children in 1994 and served as a fundraising consultant to Voices during its first three years and again for several years starting around 2010.

Since 2015, Lee has served on the Voices board, offering invaluable fund development advice.

“It takes people with imagination, knowledge, and commitment to understand what Voices does and the importance of giving to Voices,” Lee says. “Voices does not deliver food, shelter, or mental health services to children; rather, it creates the environment that makes it possible for direct-service government agencies and nonprofits to deliver those services.”