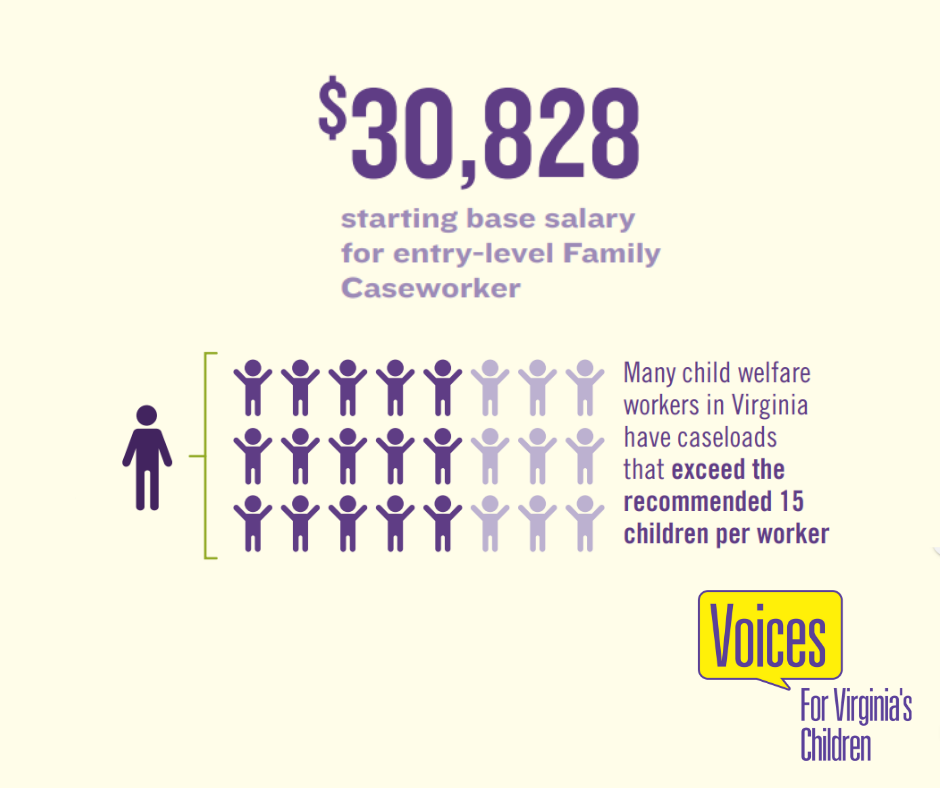 In December, the Governor proposed several investments into the child welfare system. On Sunday, the House and Senate money committees submitted their changes to the proposed budget. Over the next week, each chamber will select budget conferees to work out items that were included in one chamber but not the other.

Turnover rates for entry-level family services worker specialists are 61 percent, with retention efforts being an even greater issue in small, rural agencies. The Governor proposed a 12 percent salary increase but the House and Senate reduced this to 6 percent.

Separately, the Senate included $1 million to start a training academy for local department of social services to address retention and recruitment issues of caseworkers. The House did not include this funding.

Currently families that care for children outside of the foster care system, in arrangements known as kinship diversion, do not receive the same financial supports, or access to mental health and social supports as foster families. The Governor proposed $16 million to provide relative support payments for children diverted from foster care to kin. The proposed amount remained the same in the House and Senate budget!

As a significant improvement over the introduced budget, both the House and the Senate increased TANF payments with the Senate proposals being slightly stronger. The Senate proposed increasing cash assistance and eligibility levels by 20 percent. This would give kinship care families an increase in monthly child-only TANF payment amounts by approximately $75 per month for two children.

In addition, the House funded $150,000 for the Department of Social Services to fund a study for creating policies for emergency kinship placements. They also funded HB933 to expand the kinGAP program to fictive kin.

The Senate funded SB570 to create a state funded kinship guardianship assistance program, but it was not included in the House.

The Senate included $400,000 to support Virginia expanding their kinship navigator programs, the House did not.

The federal Family First Prevention Services Act reforms Title IV-E and Title IV-B of the Social Security Act, the federal child welfare financing streams that provide services to families at risk of entering the child welfare system. With Virginia intending to start implementation in July, the Governor proposed $66 million to create local prevention divisions. The House and Senate reduced this amount to approximately $40 million. The House and Senate also took into account federal dollars that Virginia will receive as part of the passage of the federal Family First Transition Act that was signed into law earlier this year.

Teens in foster care often face significant barriers to obtaining a driver’s license, such as difficulty securing the typical parental or guardian permission needed to enroll in driver’s education or secure an insurance policy, as well as an inability to pay for the various fees associated with becoming a driver. The Senate included $500,000 over two years to create a program within the Department of Social Services to help youth in care obtain drivers license, the House did not include this funding.

Establishing an Office of Children’s Ombudsman

The Office of the Children’s Ombudsman would be an independent agency to independently investigate any complaints relating to the Department of Social Services, local departments of social services, child-placing agencies and child-caring institutions and ensure improvement of care to children in foster care and adoptive homes. The House included $950,000 to fund this office, but it was not included in the Senate.