A staffer’s take on the intersection of race, trauma, and the summit 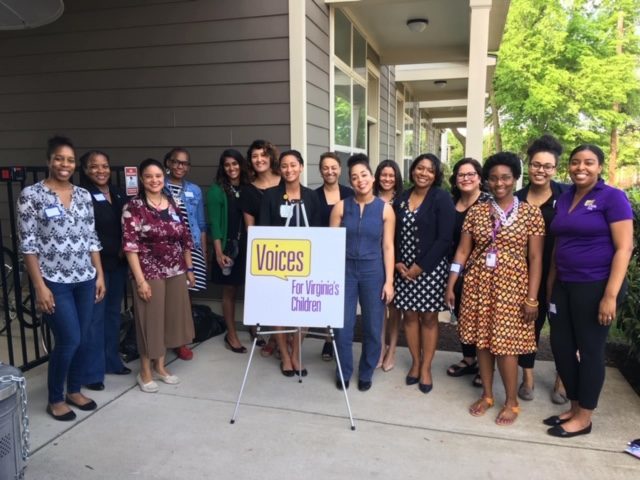 Voices for Virginia’s Children held The Virginia Summit on Childhood Trauma and Resilience on April 25, 2019. The Summit featured an array of workshops, including The Intersection of Racial Inequity and Trauma led by The Southside Trauma-Informed Community Network. The presenters identified and discussed the challenges of racial inequities and how trauma may later present within people of color. The supporting organization of the Southside Trauma-Informed Community Network, the Crater Health District, will also host its second Beyond ACES Summit, which will discuss the impact of race, culture, and poverty on ACES, on August 8-10, 2019. Save the date and find the details here!

Voices Outreach Coordinator, Chloe Edwards, sat in the breakout session hosted by the STICN. Edwards has a high ACES score of eight and still witnesses the obstacles of racism and oppression. She openly talks about entering kinship foster care at fourteen, which gave her the desire to advocate for permanency for all children. Once served by a Court Appointed Special Advocate, Edwards became a Court Appointed Special Advocate for Henrico CASA. Chloe touches on her experience of being the daughter of a now recovering addict, which encouraged her to become a board member for the Henrico Too Smart 2 Start Coalition. Chloe is proud to support the Campaign for a Trauma-Informed Virginia to prevent and treat trauma on behalf of other children. Edwards added, “The adversities I faced in my childhood are not quite as complex as the obstacles rooted in the color of my skin as a Black woman.” The race-focused breakout session at the summit created a safe space to discuss racial trauma. She said, “However, creating safe spaces for people of color and creating communities for people of color are two different challenges.”

“The adversities I faced in my childhood are not quite as complex as the obstacles rooted in the color of my skin as a Black woman.”

While sitting in the breakout session, Chloe recalled the Professionals of Color Networking Event that was hosted by Voices the day before the summit. Edwards noted that being surrounded by other people of color and not being one of the few minorities in a room reminded her of the level of comfort that comes with culture, “But then you leave that safe space, and it is an unspoken conclusion among all who were present that now it is time to return to the realities of conformity, assimilation, racism, and oppression.” Chloe believes that the most unfortunate part about racial trauma is not the actual racism, but instead, the denial that it even exists. She says, “Color blindness only leads to color blind racism. It tells a minority her experience with racism does not exist.” In reality, whether one  chooses to see color or not, the world is not colorblind; unconscious biases are a real thing. She is pleased with the work that these organizations are doing around racial trauma, but it reminds her that there is still so much work to be done.

On the same day as the Summit, The Family and Children’s Trust Fund (FACT) highlighted the intersection of race and trauma by launching its issue brief titled, Systems of Trauma| Racial Trauma. The brief explores how racial trauma worsens toxic stress caused by family violence, adding to the emotional pain of a person’s experience with racism and discrimination. Eliminating race-related trauma requires intervention on all levels because it happens institutionally, culturally, environmentally, and on an interpersonal level. FACT’s brief noted, “Because of the prevalence of racial discrimination, being a racial minority generally leads to greater stress. Simply anticipating racist events will switch on the body’s stress response systems.” The brief delves into the historical aspect of trauma  and how it impacts entire communities as a result of cumulative psychological harm across generations of families.

“Because of the prevalence of racial discrimination, being a racial minority generally leads to greater stress. Simply anticipating racist events will switch on the body’s stress response systems.”

Learn more about the effects of racial trauma on communities of color and strategies to prevent and combat race-based traumatic stress by reading The Family and Children’s Trust Fund’s issue brief here. Voices appreciates all of our partners who work to prevent and mitigate the impact of trauma across all sectors of the child-serving fields. If you missed The Virginia Summit on Childhood Trauma and Resilience, see an overview on our page.