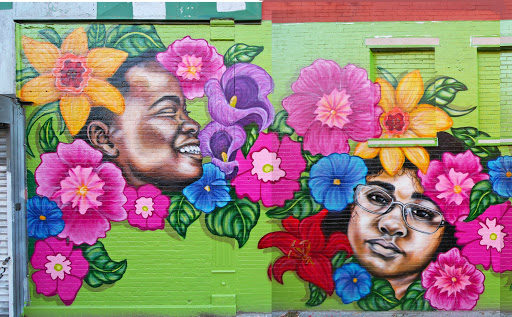 Black children and youth sacrificed their childhoods for their involvement in the civil rights movement, including time, imprisonment, lynchings, beatings, and death. I often wonder what contributed to the resilience of these young people who were willing to exchange their lives for justice. I concluded that there is comfort in culture. In Black culture, our elders and ancestors have always prepared us for the realities we face when we explicitly choose to combat oppression through advocacy. I remember the personal decision I made at the age of nineteen after experiencing racism on my college campus. As a result, I began my journey as a social activist to fight against institutionalized oppression and often faced racial slurs, such as, “Go back to Africa.” I remember being afraid to walk home alone as I passed a swastika on the way to my campus apartment. My Aunt Karen asked me, “Are you willing to risk your life for justice?” I flashbacked to  activists like Angela Davis – who was charged with a double murder, Martin Luther King, Jr. – who was assassinated, and The Angola Three- who spent most of their lives in prison. I answered, “Yes.” The decision was not difficult for me to make, but I knew that the decision was not for everyone as there were great consequences affiliated with the pursuance of justice. 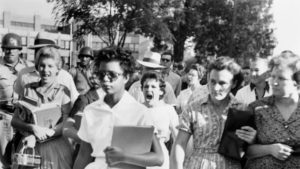 The Little Rock Nine contributed to the integration of Little Rock Central High School, which resulted in acid being thrown at their face, being pushed down a flight of stairs, thousands of White protesters that resisted their presence, and even the deployment of the National Guard by the Governor of Arkansas to stop integration. Even after the Brown vs. Board of Education decision in 1954, the US Supreme Court still had to issue another decision to all school districts to integrate “with all deliberate speed” in 1955. President of the Arkansas NAACP, Daisy Bates, had to choose nine high school students that she felt were resilient enough to face the resistance against integration. Those selected were Elizabeth Eckford, Jefferson Thomas, Gloria Ray, Thelma Mothershed, Melba Patillo, Terrance Roberts, Carlotta Walls, Ernest Green, and Minniejean Brown. Months prior to the integration, the students participated in intensive counseling sessions in order to prepare them for the traumatic events to come. In 1957, police attempted to escort the students to school after the National Guard (ordered by the Governor of Arkansas to stop them) was deployed, but even with the presence of the 101st Airborne Division, the students were met with protests. Little Rock Central High School closed in 1958 after residents rejected the official integration of the school but re-opened in 1959. The nine students succeeded in their careers, and President Clinton recognized them for their significant role in history and awarded them with the Congressional Gold Medal. In 2009, all nine were invited to President Obama’s first inauguration. This is what resilience looks like. 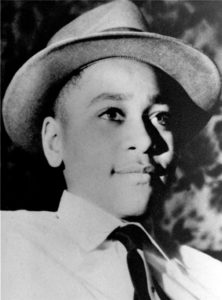 Emmett Till was just 14 years-old in 1955 with plans to visit his Uncle Moses Wright in Mississippi from Chicago. He was not conditioned to address White people as “sir” or “ma’am,” because he had White friends in Chicago. He even kept a photo of a White girl in his wallet, referring to her as his girlfriend. At the age of 14, Emmett Till was tortured and brutally murdered by two White men in Money, Mississippi. His body was found unrecognizable in the Tallahatchie River. A White woman accused him of whistling at her. This was a technique he often used to cover up the lasting effects of his polio, which was his inability to control his stuttering. His murderers were found not guilty by an all-White jury. His death sparked the Civil Rights movement. On January 24, 1956, Look magazine published the confessions of J.W. Milam and Roy Bryant, the two white men who were acquitted but covered by double jeopardy. Now 65 years after 14-year-old Emmett Till was lynched in Mississippi, Congress has approved legislation designating lynching as a hate crime under federal law 410 to 4 on Wednesday, February 26th, in the House. It now goes to the White House, where President Donald Trump is expected to sign it. The Senate unanimously passed the legislation last year. It designates lynching as a federal hate crime punishable by up to life in prison, a fine, or both. Representative Bobby Rush, a Democrat whose Chicago district includes Till’s former home, stated, “The bill will belatedly achieve justice for Till and more than 4,000 other lynching victims, most of them African Americans.”

Girls for a Change

The fight against injustice still exist today. CEO of Girls for a Change (GFAC), Angela Patton, founded the organization as a first step to end the prejudice, poverty, and lack of resources that leave Black girls and young women vulnerable at the margins of society. Through GFAC programs, not only do girls create change by engaging in social change projects, but in the process, they learn problem-solving skills, as well as what it means to change policy and create movements. GFAC programs also focus on leadership skills, goal-planning, financial literacy, building a network, exposure, community engagement, skill-building, sisterhood building, and socio-emotional learning among other things. Their programs address  institutional racism, sexism, the digital divide, and the glass ceiling, which for many Black girls can be a “concrete ceiling”. Girls for a Change take on complex societal issues long before their time, but they recognize the implications of oppression, even if they cannot put a name to it. However, there is comfort in culture. Their coaches are there to support them, serve as their cheerleaders, culturally connect to them, and serve as their sisters in service as every coach is referred to as “sister.”

There are still inequities when it comes to education. Imagine the risk a Black person faced when attempting to gain an education in times where literacy was against the law for Black people. Executive Director of Virginia Excels, Taikein Cooper, participated in social change in his early years. During his college years, Taikein led various political action committees, served on the prestigious Chancellor’s Search Committee and even led a grassroots effort to Louisiana, calling for justice for the infamous Jena Six. Today Virginia Excels, concentrates it’s mission on policies and practices that advance racial and socioeconomic justice—both in and around schools—so that every child has the chance she deserves. Their initiatives includes a Youth Ambassador program to provide students with the tools and capabilities to improve education policy that directly affects them and their classmates. The objective is to prioritize students by elevating their voices to their maximum potential – and training them to advocate for better educational practices.

When I witness the long journeys to success that these children face, and the advocacy they participate in in the process to get there, it reminds me of Why Black Children Have to Be Resilient (Read this blog). For Black Children, resilience is mandatory to surpass all odds. I think of the question my Aunt Karen asked me at the age of nineteen, “Are you willing to risk your life for justice?” No one should have to respond yes to that question. No one should have to be asked. However, there is still comfort in culture.